WW2 US ART AND IMAGES Recruiting Recruiting poster for the US Nurse Corps.  Nice image of a pretty young women in uniform gazing off to a bright future. .

Artist: Carolyn M. Edmundson
Artist Dates: 1906-1992
Signed Within Plate: Yes
Date of Work: 1943
Description: This poster contains a wholesome image of an attractive woman in a gray dress military uniform with a “CADET NURSE” sleeve patch. She has light-colored hair and wears a beret. This is a great example of a recruitment poster that completely disassociated joining the nurse corp with the horrors of war. Artist: Anton Otto Fischer
Artist Dates: 1882-1962
Signed Within Plate: Yes
Date of Work: 1942
Description: This poster represents the harsh reality of the war. The emphasis is to warn Americans to keep quiet about merchant ship movements and their knowledge of Allied ship positions. Viewers are reminded that a little slip of the tongue, or discussing ship movements, can put the lives of American sailors in jeopardy. Fischer was generally considered to be a marine artist, as many of his works portray ships on the open seas. In addition to his war-time paintings, Fischer also illustrated Moby Dick, Twenty Thousand Leagues Under the Sea, and Treasure Island Dynamic Recruting poster for the US Navy.. The message "Choose Now While You Can" reflected the reality of the time. Draftees were assigned to whatever branch the system wanted, and volunteering at least gave one the option of some choice.

Artist: John Falter
Artist Dates: 1910-1982
Signed Within Plate: Yes
Date of Work: 1942
Description: John Falter depicts a group of white Americans cowering against a brick wall, while the menacing shadow of a brutal dictator beating a helpless victim falls across them. The poster is headlined with a paraphrased quote from Abraham Lincoln’s “House Divided” speech: “This world cannot exist half slave and half free.” The poster then entreats the viewer to “Sacrifice for Freedom!” 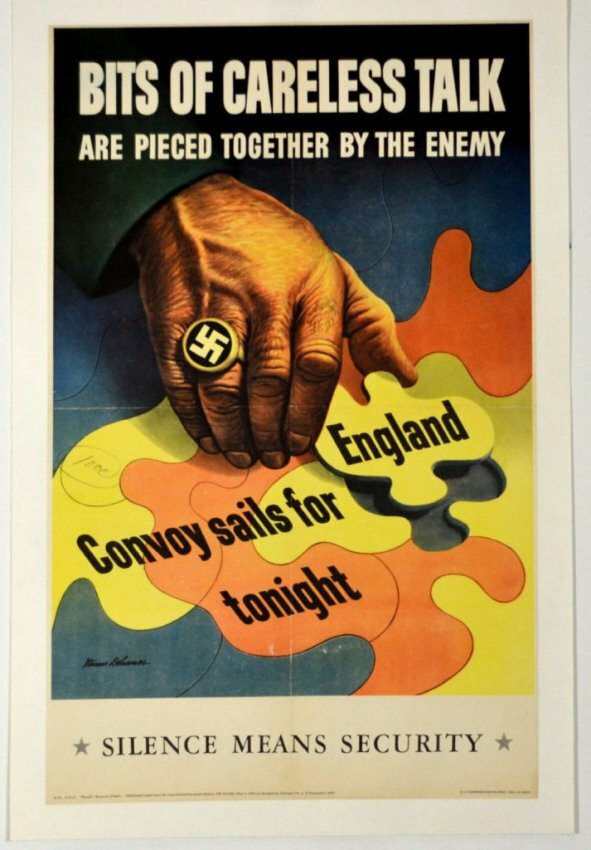 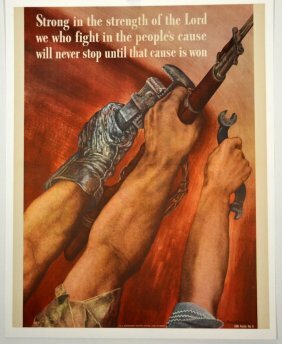 Artist: David Stone Martin
Artist Dates: 1913-1992
Signed Within Plate: Yes
Date of Work: 1943
Description: The title is borrowed from a speech given by Vice President Henry Wallace in 1942 in New York. Three arms reach upwards together, one holding a gun and the others holding tools. This poster promoted cooperation among various segments of the American society. Martin worked with Ben Shahn at the Office of War Information (OWI) and was greatly influenced by his style. Martin is regarded as one of the best and most prolific of jazz record album illustrators and is responsible for creating more than 400 over the course of his career. He, like Shahn, settled in the New Deal created utopian cooperative aptly named Roosevelt, New Jersey. These artists created what became a vibrant arts community over the years, attracting writers, playwrights, artists and musicians. Today, Roosevelt still stands as a testament to these artists and their vision and a sense of community spirit and artistic expression still permeates this small bucolic enclave 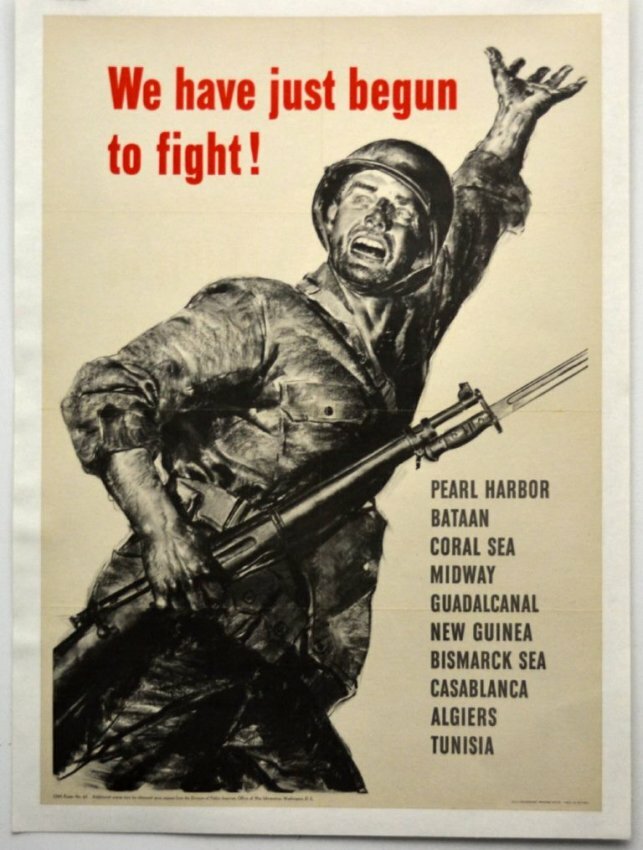 Artist: Anonymous
Artist Dates: Unknown
Signed Within Plate: None
Date of Work: 1943
Description: This adaptation of a French WWI poster shows a soldier urging his soldiers forward. The title quotes John Paul Jones, the Revolutionary War hero. The Battles listed include combat action from 1941 to 1943 Artist: Norman Rockwell
Date of Work: 1943
Description: “Save Freedom of Worship” was the second of Norman Rockwell’s Four Freedoms to be published in the Saturday Evening Post. He considered it, along with “Save Freedom of Speech” to be his best work but he also called it the most difficult of all the paintings to finish. He originally used a barbershop setting to depict Americans of all races, ethnicities and religions getting along harmoniously. But he couldn’t get past painting with that scene without stereotypes, so he was forced to come up with his final grand statement about the freedom of worship.
In his 1941 State of the Union Address, President Franklin D. Roosevelt proposed that people everywhere in the world were entitled to four fundamental freedoms:
Freedom of Speech
Freedom of Worship
Freedom from Want
Freedom from Fear
This speech has forever come to be known as FDR’s Four Freedoms speech, and it provided inspiration for Norman Rockwell to create a set of Four Freedoms paintings, one for each freedom. Rockwell claims that the government initially had no interest in these paintings, and it was only after seeing public reaction to their publication in four consecutive weekly issues of the Saturday Evening Post from Feb. 20 to March 13, 1943, that the government saw their potential and used them in poster campaigns for war bonds. The original paintings were taken by The Treasury Department on a tour of the country, and along with the issuance of the posters, raised more than $132 million for war efforts. The New Yorker reported that Norman Rockwell’s Four Freedoms “were received by the public with more enthusiasm, perhaps, than any other paintings in the history of American art.”