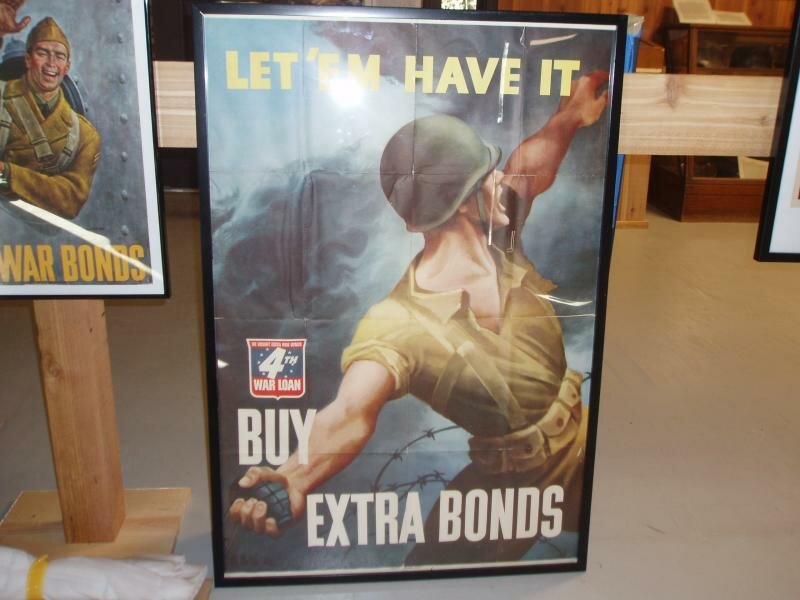 "LET EM HAVE IT."   A classic image of an American soldier hurling a grenade at some unseen enemy.  The smoke filled background and worn uniform depicts a heavy combat environemnt...a reminder fo what you war bond investment was paying for. Artist was P Nerlin and printed in 1943 to support the 4th War Bond drive. Description: Comical issue of a woman caught inthe act of going through a man's trousers with his only reaction being to be sure to put some of that  money in war bonds. Artist: Joseph Hirsch
Artist Dates: 1910-1981
Signed Within Plate: Attributed
Date of Work: 1942
Description: Joseph Hirsch’s original painting “Till We Meet Again” became the most widely reproduced War Bond painting during WWII. It depicts a smiling soldier, wearing his winter issue uniform framed by a troopship’s porthole. He waves goodbye, confident that stateside support for war bonds will buy him the equipment he needs to bring him home safe and sound. Hirsch was noted for his social realism paintings, particularly during the Depression years Artist: Sarra, Valentino
Artist Dates: 1903-1982
Signed Within Plate: Yes
Date of Work: 1943
Description: Soldiers march off to war in the background; in the foreground, a woman carries groceries and other purchases. A reminder of the shortage of vital material and the need to make everything last as long as possible. Artist: John Atherton
Artist Dates: 1900-1952
Signed Within Plate: Yes
Date of Work: 1943
Description: This poster is a great image that has been recognized for its quality by graphic arts publications. A stark white cross with the GI’s helmet and ammo belt shows the consequences of a careless word. Prevention of espionage was a major concern during WW2 and in all wars. For John Atherton there was no line drawn between his “fine” and “commercial” art,

Atherton was born in Brainerd, Minnesota, studied at the College of the Pacific, and the California School of Fine Arts in San Francisco. He first worked in a number of West-Coast art studios learning the basics of his craft. When he won a $500 first prize award in the annual exhibit of the Bohemian Club in 1929, it financed his move to New York.
There, he began to do illustrations for advertisers, including General Motors, Container Corporation of America, and Shell Oil, and covers for Fortune, Holiday, and The Saturday Evening Post.
His first one-man show was held in Manhattan in 1936. In the "Artists for Victory" show in 1943, his painting, The Black Horse, won the $3,000 fourth prize from among 14,000 entries. It now hangs in the Metropolitan Museum of Art in New York. His work is also represented at the Whitney Museum, Museum of Modern Art, Chicago Art Institute, the Pennsylvania Academy of the Fine Arts, The Albright Art Gallery in Buffalo, and the Wadsworth  in Hartford

"OUR STREET CORNERS MUST NOT BE NEXT." The image of a German Army soldier fixing bayonet on a street corner in France serves as a warning that this could happen here.  Very nice depiction with good detail and fairly accurate depiction of a German soldier with an Iron Cross.  This must have been a local poster designed to promote patriotism by the listed paper company in Wisconsin. Artist: Allen Saalburg
Artist Dates: 1899 - 1987
Signed Within Plate: Yes
Date of Work: 1942
Description: Poster uses text from Roosevelt’s Day of Infamy speech. It displays the image of a tattered American flag waving in the wind. The flag is hanging from a crooked pole at half-mast against a background mostly consisting of dark plumes of smoke and the glow of fire. There is a large hole in the middle of the flag, through which can be seen both the smoke and the blue skies and clouds together. With the anguish and grief of Americans linked to the events of December 7, 1941, the poster is an attempt to promote nationalism and boost support of the war effort. Allen Saalburg painted large murals in NYC prior to illustrating WWII posters. Artist: Harry Anderson
Artist Dates: 1906 - 1996
Signed Within Plate: Yes
Date of Work: 1943
Description: Weeping parents look up from the dreaded message that their son is a war casualty. The American secrecy campaign depended, to some extent, on a desire to gain control over otherwise uncontrollable events. Anderson, a devout Seventh-day Adventist, is well known for his Christian themed illustrations and paintings 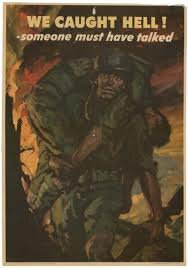 Artist: Stevan Dohanos
Date of Work: 1943
Description: This poster is only one of several of the great “careless talk” type posters that American artist/illustrator Stevan Dohanos composed for the U.S. Office of War Information. He, like Norman Rockwell, was an artist of the “social realist school.” His most lauded works were snippets of American civilians and their lives that graced more than 100 covers of The Saturday Evening Post.