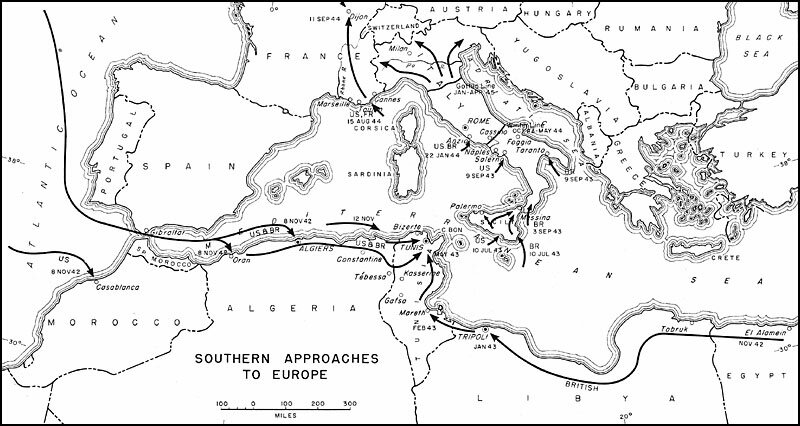 While the Allies agreed that Germany needed to be the primary focus of their effort, they disagreed on how to go about accomplishing that.  The Russians were still reeling from the German invasion and desperately nreeded any action that would divert German forces.

Tthe British beleived the best way to get at Germany was through southern Europe. A raid on the French coastline near Dieppe served as a grim example of the German capability to respond to any sort of amphibious invasion.

The British Navy was England's greatest strength and after a series of battles with the Italian Navy, the British pretty much ruled the Mediteranean.  On land they had been dueling with the Germans in North Africa since the Afrika Korps arrived to bail out the Italians in 1940.

For the British North Africa was a major campaign.  For the Germans it was more of a sideshow, inceasingly so as the Russian campaign consumed more of their military resources. Since they were already invested there and still believing that there was a British Empire, this was where they felt the focus should be.

American strategy remained focused on a cross channel invasion.  Never impressed with the British Southern Strategy, the Americans ceded to making some effort there, if only to provide an opportunity for hardening units and divert German troops from defendng western Europe.

The whole concept of Winston Churchill's mantra about attacking the the "soft under belly of Europe" through either the Balkans or Italy did not take into account the severe mountainous terrain of that part of the continent, which offered the defender a decided advantage.

While the Brits were able to get the Americans to make an investment in the Mediteranean, the American prioroty remained focused on building up their forces in England for the cross channel invasion.    ﻿

In retrospect it was undoubtedly a good thing that American units had the opportunity to gain battlefield experince against the Germans in North Arfrica and Italy.  Had the American forces landed France without that that experience, and against the veteran German units there, the outcome would have likely been a disaster.

As it was, the campaigns in North Africa, Sicily and Italy served to harden the American forces, and manage dto tie down German units that could have been depluyed elsewhere.