The Germans entered the war with probably the best trained and well equipped army in the world.  Militarism was a strong part of the German character and military service was viewed as the basic obligation for men.

Germany was largely unprepared for war in 1939 as they had only begun to rebuild their military in 1934.  Yet they had a solid base of WWI veterans, a strong sense of nationalism steeped in military tradition and a willigness to embrace new thoughts and technolgies. Their commitment to military readiness resulted in the premiere fighting force by continuing to intro duce the newest technologies and tactics.

The Wehrmacht demonstrated is capabilites in the initial Blitzkreig of Poland in 1939.  The Western Allies were slow to pick up on the rapidly evolving pace of modern warfare which the Germans were constantly refining.

The West lost the Battle of France not because the German Army had more or better tanks, but because their tanks had radios which most French tanks did not.  This made a huge difference in combat.

Operation Barbarrosa in June 1941 was the begining of hte end for the Wehrmacht.  The invasion of the Soviet Union started a steady drain of men and equipment that accelerated with each passing day.

The Battle of Kursk in the summer of 1943 was probably the high water mark mark of the Germans.  After Kursk the war turned into a steady defensive struggle in the east.  Heavy personnel losses became the regular storyline on the Eatern Front.

The Germany Army ramped up its weaponary as the war progressed in the East.  The introduction of the MG 42 continued the process of increasing the firepower of combat units and the Panzerfaust and Panzerschreck gave the Infantry effective anti tank capability. 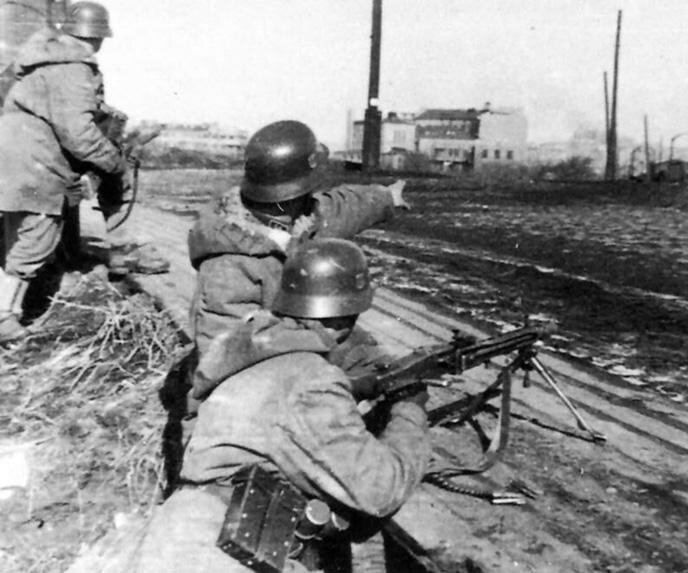 By 1944 the core of the German Army had largely been consumed in the horrific battles on the Eastern Front.

Heavy personnel losses from the East resulted in the recruitment of foreign volunteers of questionable commitment, mostly from Eastern Europe, to fill in gaps for defending the Reich.  The low quality of these troops was demonstrated during the Normandy invasion where many of these volunteers surrendered at the earliest opportunity.  In contrast, the Americans landing at Omaha Beach had the misfortune of encountering a regular German unit refitting from battles in the East and met stiff resistance. By the Fall of 1944 the huge losses sustained in Russia and in France that summer required the creation of new Infantry Divisions that economized on personnel and emphasized defensive strength over offensive strength. These “Volksgrenadier” Divisions were organized around small cadres of hardened veterans, NCOS, and Officers and bulked out with any personnel that could be scraped up from “unemployed” Luftwaffe and Kriegsmarine personnel, wounded soldiers returning from hospitals, older men unfit for regular service and teenagers.  Conscription criteria now included ages 16 to 60.  The units also had a higher proportion of automatic weapons and thus relied more on short-range firepower than in standard German Army infantry unit.  The Volksgrenadier Divisions performed surprising well in the winter battles of 1944-45. The Infantry Gefreiter shown here is wearing the standard M36 style uniform of gray green wool and is armed with the Mauser 98k rifle which continued as the basic Infantry weapon.  He is fitted out with the standard assault gear including "A" frame, camouflage poncho, messkit, gas mask canister and entrenching tool. 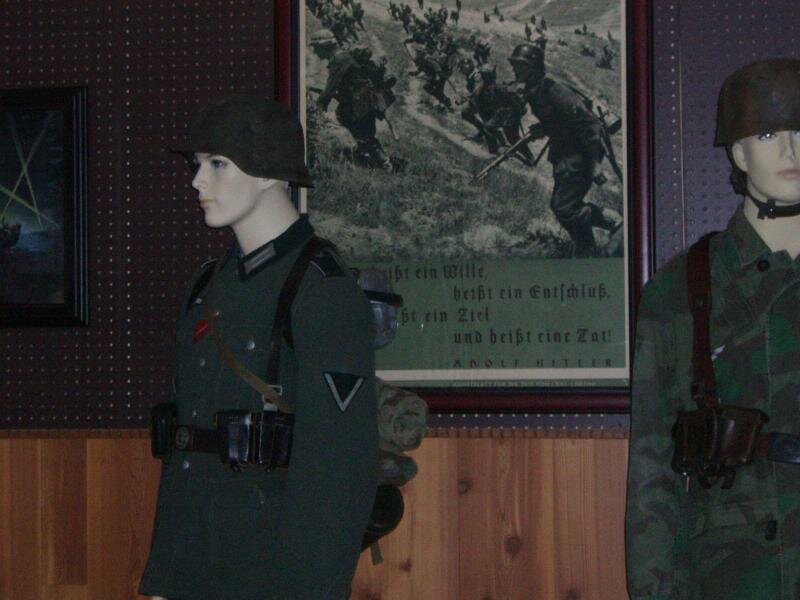