The Maschinengewehr 34, or MG 34, is a recoil-operated air-cooled machine gun that was first tested in 1929 issued to German units in 1936. It accepts the 7.92×57mm Mauser cartridge.

The MG 34 was arguably the finest machine gun in the world at the time of its adoption and deployment with the German Army. The MG 34 combined four substantial advantages over other machine guns: 1. mobility, being light enough to be carried by a single soldier; 2. an astonishing rate of fire of up to 800 to 900 rounds per minute; 3. the ability of the gun to sustain that fire; and 4. an effective range of over 2,000 meters.  As such, it can generally be considered to be the world’s first general-purpose machine gun.

The MG 34 could operate in offensive or defensive applications. The offensive model, with a mobile soldier, used a drum magazine that could hold either 50 or 75 rounds of ammunition. In a stationary defensive role, the gun was mounted on a bipod or tripod and fed by an ammunition belt. During sustained fire, barrels would have to be changed at intervals due to the heat generated by the rapid rate of fire. Changing barrels was a relatively quick process for the trained operator and involved disengaging a latch and swinging the receiver to the right for the insertion of a new barrel.

The MG 34 was the mainstay of German Army support weapons from the time of its first issue until 1942, when it was supplanted by the next generation MG 42, an example of which is on display in exhibit 6d.   Although the MG 34 was very reliable and dominant on the battlefield, it was a precision engineered weapon which resulted in high production costs and slower rate of production. The MG 42 used mass production techniques and was cheaper and quicker to produce though the Germans continued widespread production of MG 34s until the end of the war.  This particular MG 34 was made in 1944. 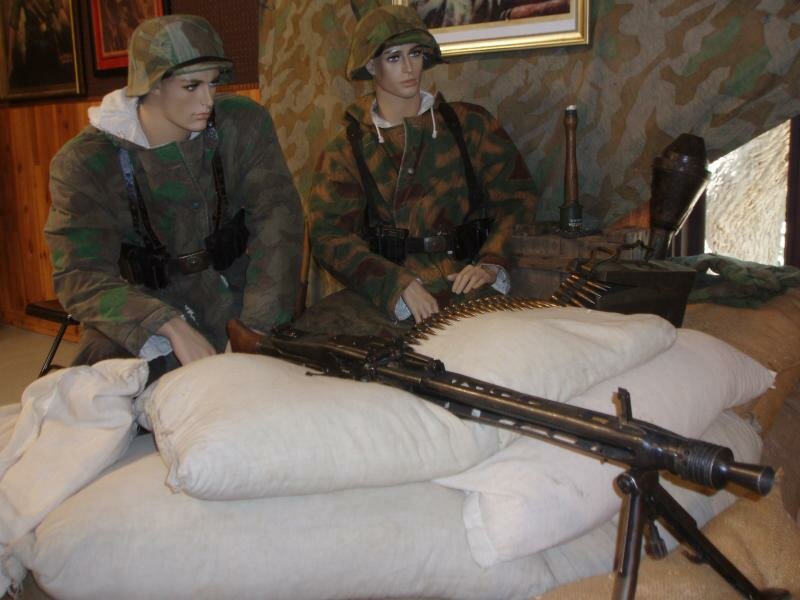 The MG 42 was a 7.92mm general purpose machine gun that entered service in 1942. It supplemented, and, in some instances, replaced the MG 34 in all branches of the German Armed Forces, though both weapons were manufactured and used until the end of the war.  Like the MG 34, the MG42 could be used in both the offensive and defensive modes with a drum magazine and a tripod for defense.  It had a maximum effective range of 2000 meters.

The MG 42 has a proven record of reliability, durability, simplicity, and ease of operation, but was most notable for its ability to produce a stunning volume of suppressive fire. The MG 42 has one of the highest average rates of fire of any single-barreled man-portable machine gun: between 1,200 and 1,500 rpm.  The MG 42's belt-feed and quick-change barrel system allowed for more prolonged firing in comparison with any other existing weapon.  The exceptional rate of fire made the MG 42 one of the most dreaded weapons that an Infantryman might encounter on the battlefield.

Both the MG 34 and MG 42 could be used with detachable 75 round drum magazines.  This  provided the gunner with a self contained linked ammunition. source while in movement.  . 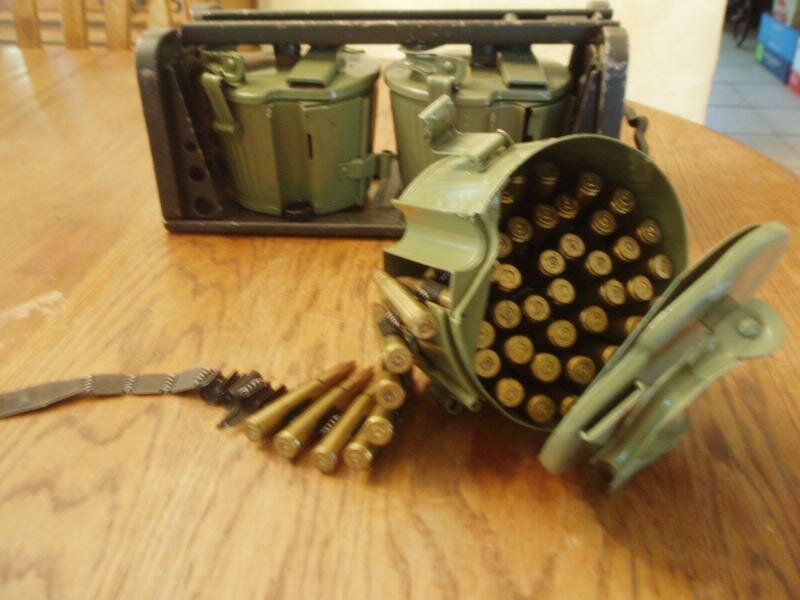 The drum was attached to the feed side of the weapon which allowed the gunner to be mobile without the normal restrictions of belt feed ammunition.  Two drums came with a carrier that was easily transportable.