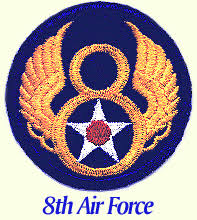 After a dedicated campaign designed to eliminate the Luftwaffe in Western Europe, planes of the 8th Air Force dominated the skies over Europe.  By the time the Allies invaded France in June of 1944 they were essentially unchallenged in the air.  In addition to paralyzing logistical networks making even basic resupply a constant challenge, German ground formations and tactical operations were constantly under assault which greatly assisted in the eventual defeat of the German Army in Europe.

The Mighty Eighth compiled an impressive record in the war. This achievement, however, carried a high price. The 8th AF suffered one-half of the U.S. Army Air Forces’ casualties in World War II (47,000-plus casualties with more than 26,000 deaths). The Eighth’s personnel also earned 17 Medals of Honor, 220 Distinguished Service Crosses, 850 Silver Stars, 7,000 Purple Hearts 46,000 Air Medals. Many more uncounted awards were presented to the 8th AF veterans after the war. There were 261 fighter aces and 305 gunner aces in the Eighth in World War II; 31 of those fighter aces exceeded 15 or more aircraft kills.