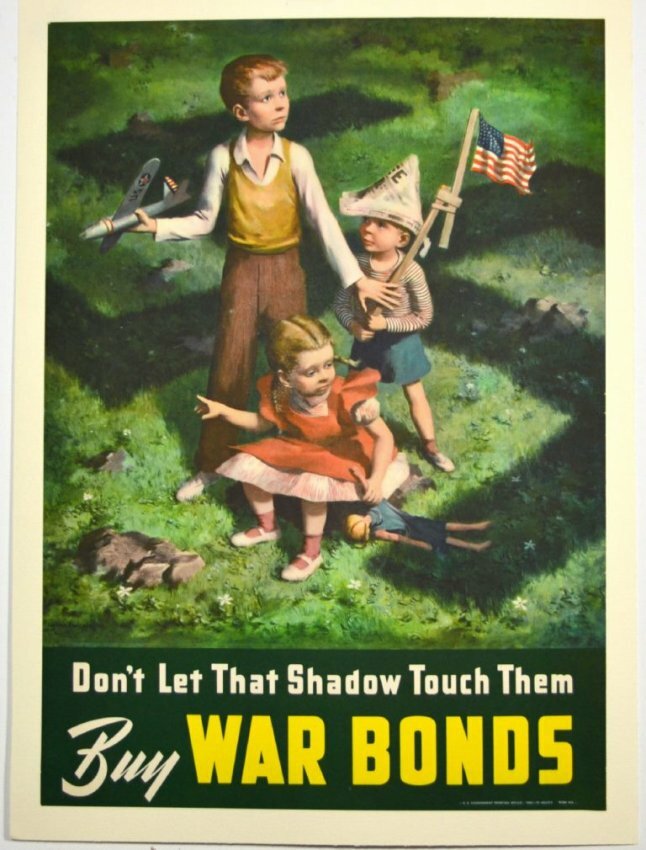 Artist: Lawrence Beall Smith
Date of Work: 1942
Description: Shadowed by a swastika, three children stop playing, sensing danger above. The oldest child shields his younger brother while still holding on to a model of a toy U.S. bomber, the powerful weapon which will deliver them all from evil. Beall-Smith was an artist correspondent and spent time on aircraft carriers and amongst ground troops and medical units, creating some of the wars most memorable images

Artist Biography: Lawrence Beall Smith, painter, lithographer, illustrator and stone sculptor, was born in Washington, D.C. in 1909. He studied at the Art Institute of Chicago, Illinois, and at the University of Chicago, receiving a Ph.D. degree in 1931. He also studied in Boston and Gloucester, Massachusetts with Ernest Thurn, Charles Hopkinson and Harold Zimmerman. His reputation as an artist was secured by a one-man show in 1941 at the Whitney Museum of American Art in New York City. Smith had begun to exhibit his work in 1935.
Smith was commissioned by Abbott Laboratories in 1944 to cover the Medical Corps in Europe during World War II. He served as an artist at the D-Day landings of Allied troops on the Normandy beaches, as well as painting posters supporting the sale of War Bonds.
After the War, in the 1940s, he founded the Katonah Gallery (now the Katonah Museum), in Westchester County, New York. He exhibited there for many years, as well as at the National Academy of Design in New York City, and in other major exhibitions. He also illustrated books such as Robin Hood, in 1954, and Tom Jones, in 1964.
His work is in the collections of the Metropolitan Museum of Art, New York City; Addison Gallery of American Art, Phillips Academy, Andover, Massachusetts; Fogg Art Museum, Harvard University, Cambridge, Massachusetts; University of Chicago; University of Minnesota, Minneapolis; Fine Arts Museums of San Francisco, California; and the Library of Congress, Washington, DC. The art collections of the United States Air Force and United States Navy, both in Washington, D.C., hold examples of Beall's paintings and prints depicting the War.
Associated American Artists in New York City, commissioned original graphic art from artists, and published Smith's lithographs over a span of thirty years, from 1940-1970, often with children as their subject.
Lawrence Beall Smith died in Cross River, New York in 1995. Artist: A.E.O. Munsell
Artist Dates: 1896-1983
Signed Within Plate: Yes
Date of Work: 1942
Description: Targeting housewives, this poster aims to support the war effort. A blonde woman in a blue shirt and red and white striped skirt is holding a blonde baby. There is a blue sky behind them with some clouds. They are both looking down at a black toy lamb, with a flower wreath around its head. The poster is bordered by a painted picture frame. “BUY WAR BONDS” is in a metal plate fastened to the “frame” the artist has created. The artist is the son of Albert Henry Munsell, the inventor of the Munsell Color System. Artist: Unknown
Date of Work: 1943
Description: A GI is pictured toasting good citizens who comply with wartime rationing, with his cup of coffee. The government froze prices on coffee in May 1942 and it was rationed in November 1942 though July 1943 Artist: Harriet Nadeau
Artist Dates: ?
Signed Within Plate: Attributed.
Date of Work: 1942
Description: Poster contains a black & white photo of the head and shoulders of a sad-looking young girl surrounded by smoke. The photo is centered on a white swastika and the text on poster is in white and blueint:

Nadeau participated in President Roosevelt National War Poster Competition. Harriet Nadeau was part of the many artists in "Artists for Victory" area 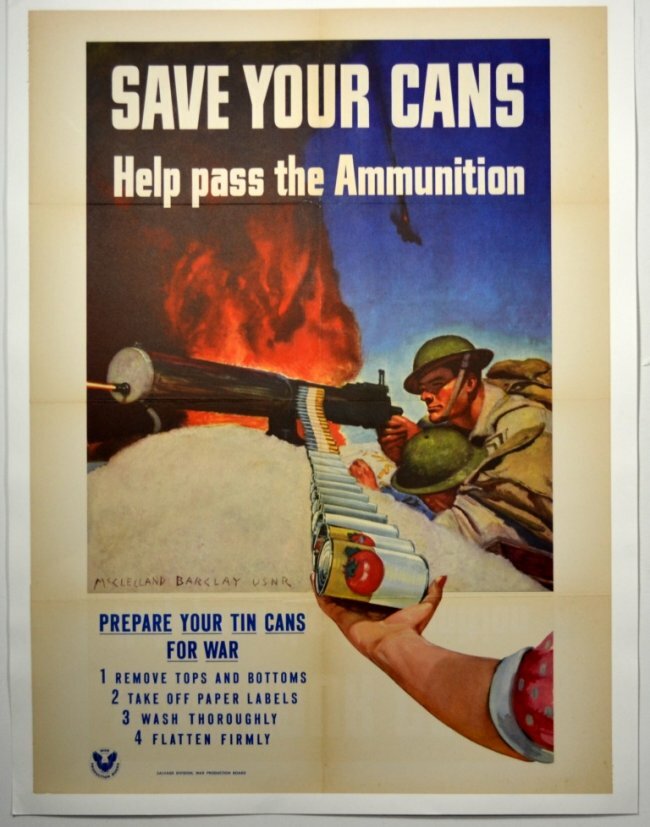 Artist: McClelland Barclay
Artist Dates: 1891–1942
Signed Within Plate: Yes
Date of Work: 1891–1942
Description: This conservation poster depicts a woman’s arm holding a tomato can that appears on the bottom right side of the poster. The can image is repeated and runs into the painting. As the cans get smaller, they change into a chain of bullets that a soldier is feeding into his gun. Barclay was best known for his pin-up girls and his images appeared in the biggest magazines of the day, including Colliers, Country Gentleman, Redbook, Country Life, Saturday Evening Post, The Ladies’ Home Journal and Cosmopolitan. In the 1930's he began painting movie poster art and is considered one of the masters of that genre Artist: Anonymous
Artist Dates: Unknown
Signed Within Plate: None
Date of Work: 1943
Description: This poster depicts a giant thumb pressed down on a ration stamp squashing a man. The Office of Price Administration produced this poster to keep Americans informed about the dangers of paying more than legal prices for goods on the “Black Market.” Artist: Anonymous
Artist Dates: Unknown
Signed Within Plate: None
Date of Work: 1942
Description: The poster image is a black & white photograph of a smiling woman, holding and looking at folded $25 war bonds and an envelope. Her dark hair is coiffed and she wears a work uniform with a “10%” slogan button on her pocket. In the background is a “paymaster” window and a “10%” slogan sign on the wall Sad woman with child and a message on the table "Missing in Action." Ultimate guilt trip to promote sales of war bonds.