American ground forces got their first taste of battle in November 1942.  In a display of naval capacity and capabilty, American troops landed in Operation Torch at several sites in French Algeria.

The invasion was not without its problems, many of which provided vital lessons learned for future operations.  The Vichy French forces were obliged to resist and a series of small battles cost both sides a lot of meaningless casualties.  German U-Boots inflcited their toll on the Fleet, but the French finally did surrender, joined the Anglo-American forces and began to move east to confront the German and Italians in Tunisa who had been doing battle with the British since 1940.

The Germans at that time were at the peak of their game as the cost of the war in Russia was just starting to be felt.  The Italians, which were why the Germans were there in the first place, had long since lost any enthusiasm for battle.

American forces were severely punished in early engagements with the Germans, the most notable being the Battle of Kasserine Pass.  As the Americans gained battlefield experience the Germans were slowly being logistically strangled.   In what was to be a glimpse of the future, Allied Air Forces  began to dominate the skies.  Air and sea forces played havoc with supplies coming across the Mediterranean, and Allied air superiority over the battlefield dominated tactical operations.

With the Italian commitment waning and the cost of the war in Russia growing, the German adventure in North African became minor distraction in the overall German war strategy. While there was a surge of reinforcements in late 1942, including the introduction of the Tiger I tank, the German's main intent was to keep the western Allies engaged in Africa rather than elsewhere.

Though the end result was never in doubt, the Germans continued to fight with determination managing to inflict several stinging defeats on Allied forces as they retreated into Tunisia.﻿

With the Americans moving in from the west and the English from the East, German and Italian forces were forced into an increasingly limited area of Tunisia,  Starved of supplies and essentially surrounded, the Axis forces surrendered in May 1943 effectively ending the North African Campaign.

The DAK was the German expeditionary force sent to bail out the Italian misadventure in North Africa.  It initially consisted of several units that were cobbled together as the 5th Light Division, which was later followed by the 15th Panzer Division. The DAK was never more than those two Divisions and some support elements.

From the time they hit the ground the DAK was on the move against the British. In a remarkable display of generalship, Rommel aggressively engaged the British, out flanking and out fighting their forces who were sent reeling back towards Egypt.

The DAK was eventually absorbed into "Panzer Army Afrika" under Rommel, but the early exploits of the original DAK became legendary and a source of immense pride for the Germans. Members of the DAK were authorized to wear a specifc cufftitle on the right sleeve recognizing their service in the Korps, though later that was extended to everyone who served in the theater. 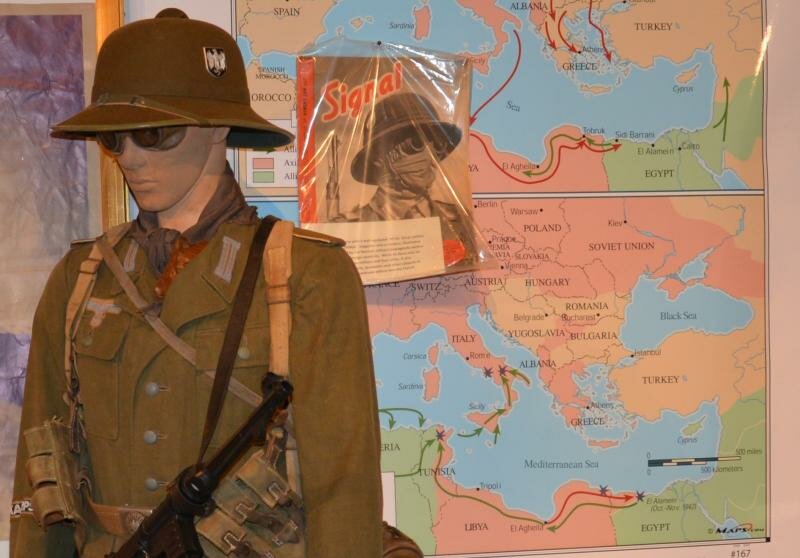 The Afrika Korps soldier here represents  an Infantry NCO as he would have appeared in 1942.  He is fitted out in the standard tropical unfrom of cotton twill with canvas field gear designed for  tropical conditions.  While he is wearing the issue pith helmet, a steel combat helmet hangs at the ready. On his right sleeve is an "AFRIKA" cufftitle denoting service in the Afrika Korps.

The soldier is armed with the MP 40 submachine gun with a pair of canvas magazine pouches, canvas belt, suspenders, and bayonet frog, and composite canteen. The gas mask cannister is roughly camoflauged for desert terrain.

The issue tropical boots were also canvas, but were not available to all and many troops still preferred the leather boots as is the case here.

This was the German soldier that the Americans first encountered in North Afrika. Though they were experencing severe supply problems the Afrika Korps were generally well equipped, highly motivated and supremeley confident. they represented the German Army at probably the peak of its game 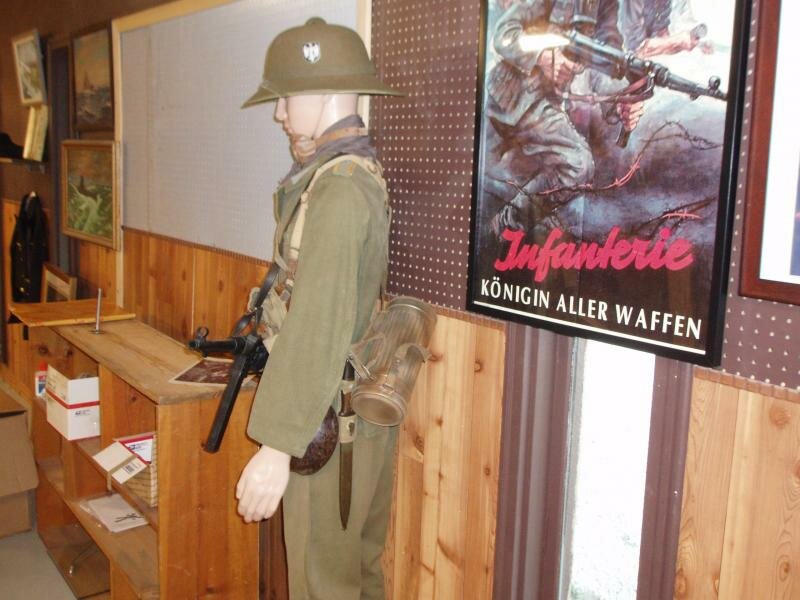